The 2016 census collected data related to respondents’ self-reported sex (or, depending on how the question was understood, gender), which was used for a range of purposes including population projections, estimates of life expectancy, family structure and gender comparisons.

Prior to 2016, it was not really possible for respondents to record themselves in the census in a way other than male or female. Building on the Australian Government Guidelines on the Recognition of Sex and Gender, ABS noted:

The aim of the 2016 Census was to make it possible for all Australians to report their sex in a way not limited to ‘male’ or ‘female’.

ABS’s work to make this ambition a reality is documented in a 2018 article entitled Sex and gender diversity in the 2016 census.

While the census topic is formally known as sex, and although ABS present online definitions of sex and gender, the census question itself did not make specific reference to sex or gender. This was intentional as it enabled respondents to interpret and answer the question in the manner they felt most appropriate.

For the 2016 census, ABS introduced an innovative approach to the collection of sex data. For the first time, a response option other than male or female was made available when the census was completed online and respondents requested access to a special online form (via a telephone call or web request box). Following this special request, respondents were issued with an online code that gave them access to a version of the census that included a question with the response options ‘Male’, ‘Female’ and ‘Other (please specify)’, with the option to write-in.

Rather than provide all respondents with three options, ABS decided on this approach as they were unsure how the general public might respond to a question that presented an explicit ‘Other (please specify)’ option.

To establish a better understanding of how census respondents might respond to a non-binary question, ABS undertook a pilot test alongside the full collection of its 2016 data. In this test, approximately 29,000 addresses (which contained multiple individuals living within) were issued a census where non-binary response options to the sex question were presented as default (rather than as something that required respondents to make a special request).

Comparing the results of the pilot test against the full 2016 census presents two different accounts of the population of Australians who did not identify themselves as neither male nor female. 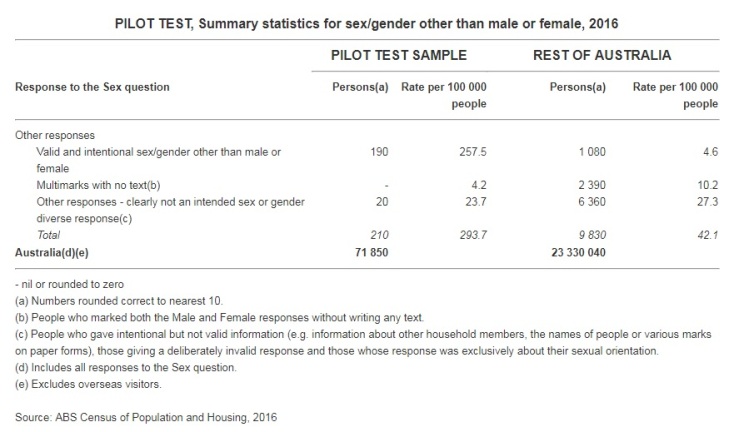 When respondents were required to request a non-binary question, only 1,080 of 23,330,040 respondents (4.6 per 100,000 people) identified as ‘Other’. When the non-binary question was presented as default, 190 of 71,850 respondents (257.5 per 100,000 people) identified as ‘Other’. It seems likely that the pilot test reported a more accurate account of Australians who did not identify as male nor female. Although innovative, the requirement for respondents to specially request access to a non-binary sex question likely dissuaded some respondents. It is also important to note that the census is generally completed on behalf of a dwelling, which often involves one person making a judgement about the perceived sex of other inhabitants.

Dr Kevin Guyan is an equality, diversity and inclusion researcher based in Edinburgh. He is writing in a personal capacity.

Dr Kevin Guyan is a researcher, writer and activist based in Edinburgh whose work explores the intersection of data and identity. View more posts